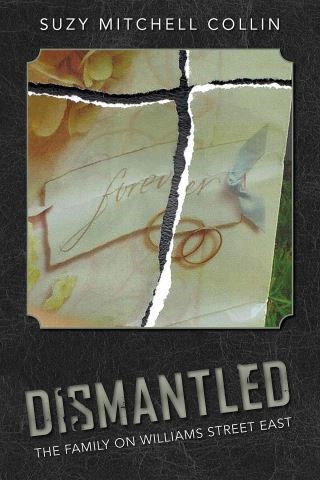 THE COVER UP IS OVER!

A married gay couple adopted nine special needs children.  In spite of the challenging behaviors and diagnoses of the children, they were flourishing at home and in school. After a decade, baseless sexual allegations against the fathers were lodged and the once thriving family was dismantled.  The fathers were arrested and treated as pariahs by the media, police and child protection services.  The court case snaked through the justice system for almost four years, leaving a wake of shattered lives.  This is the incredible true story of the largest family trampling in the history of the U.S. by a powerful government agency.  They operated with impunity along with therapists, social workers, police and media who colluded to bring innocent men to ruin.

Suzy Mitchell Collin: Suzy Mitchell Collin is an artist and writer. "Dismantled: A Family on Williams Street East" is a work of non-fiction that took over four years to complete. She witnessed the seemingly endless maze of the court system, false allegations and the resultant emotional wreckage that became the altered reality of a broken man. Suzy is a person with a passion for justice, believing in the concept that all persons are innocent until proven guilty beyond a reasonable doubt. She is also passionate about injustices that occur to anyone suffering from any form of discrimination. It was a difficult story to write, and as difficult to watch the long months turn into years of injustices that seemed to be flourishing. Hopefully, in the end, justice will triumph. But that does not mitigate the casualty of a lost family and the scars that will forever exist in the hearts of George Harasz and his missing sons.